I had hoped to surprise you today with news from the Fair, but my sister, my spy--the New York representative of Aitken, Alexander--is laid up in the...

I had hoped to surprise you today with news from the Fair, but my sister, my spy–the New York representative of Aitken, Alexander–is laid up in the Frankfurter Hof with the flu. (Get well, Momo!)

Here in San Francisco I spent the evening giving a talk at City Lights with Oscar Villalon, the decomissioned book editor of the San Francisco Chronicle. Later the conversation migrated across the street to the back room at Tosca’s, where the general manager of City Lights, Paul Yamazaki, played host to a crowd that included writers Daniel Alarcon, Josh Jelly Shapiro, and Shawn Vandor; Graywolf editor Ethan Nosowsky; and private investigator David Sullivan–who really is a private investigator … but claims the other two pictures he took of Paul and me were even worse.

The official part of the evening dealt mainly with the new tack of the Review: the abandonment of journalism for „pure“ literature, the decision to replace 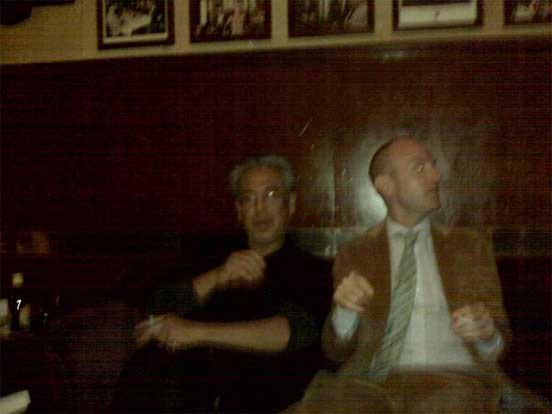 photojournalism with work by emerging artists, and the tenor of the fiction and poetry. In particular I was grilled over a remark I made in The Economist-citing Merle Haggard as the single most formative influence on my literary taste. I meant it seriously: Anna and I grew up on country music, we knew those songs before we could talk. I remain convinced that no popular songs of the period dealt so quickly, or so subtly, or so wittily, with the changing roles of the sexes in the 1960s and 70s. At the same time, country music is inherently classical-as opposed to romantic-in its respect of genre. When Merle sang, of a „love I can’t understand“: „It’s there for a while/Then it fades like a smile,“ he planted a desire for poetry that is direct when it can be, elusive when it has to be, and elegant to the point of disappearance.

At Tosca’s the conversation turned to the violence in Monterrey (where Oscar’s family is from) and, in Paul’s and my corner, to the persistence of excellent fiction when the industry has never seemed more in disarray. As many of you know, Paul is a walking encyclopedia of the book world. He and Sybil Steinberg-my old boss at Publishers Weekly-are the only people I know who can remember, not just the author and publisher of an obscure book published forty years ago, but the season of its release and the name of the poor drudge who signed it up. We discussed Anthony Heilbut’s seminal history The Gospel Sound, and I took notes as Paul gave me the rundown of his favorite fiction of this season.

Learning to read the Web