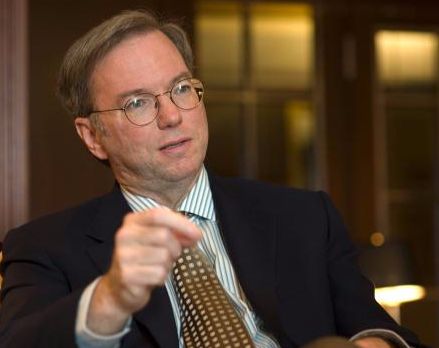 Eric Schmidt: First: There is still a lot of revenue in search – as we get the technology better or as we can do more targeted ads. There is no limit for search marketing. People assume that there is a limit, but we have many more ideas about technology. Second: The most obvious large space of advertising is the mobile internet. Every German has a mobile phone. Just take the success of the iPhone: It has the first really powerful web browser on a mobile device – and many more are still coming. Nokia has one coming, Blackberry has one and Motorola has one. They are all supposed to be released this year. By these products, the advertising gets more targeted because phones are personal. So targeted ads are possible. And that means the value of the ads will grow. The next big wave in advertising is the mobile internet.

FAZ: What about video and display advertising?

Eric Schmidt: A lot of opportunities are in video and display. But there are things where you can do ads on, but some things you can’t. Sometimes it works, sometimes it doesn’t. Mobile works all the time.

FAZ: Can mobile business be larger than the PC-Web?

Eric Schmidt: Yes, mobile will be a larger business than the PC-Web. But it will take a few years.

Eric Schmidt: This comparison is not correct. Marco should know better. He is very clever and he understands what Linux is. Android is a development interface that is different from others. It is a development platform for java-based applications for mobile phones, it has nothing to do with Microsoft, it is free, and modifying is easy. That is the bet. But it is not shipped yet. We can’t say how well it is going because it is still in development. 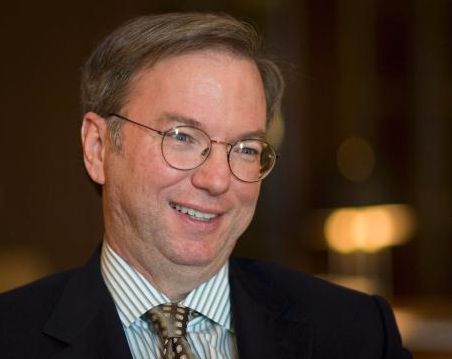 FAZ: Google made a large investment in a Wimax network in the US. Can you tell me your strategy behind that?

Eric Schmidt: The idea is: We are concerned that the carriers in the United States might close off the network. In the Clearwire network, all carriers would allow any device to connect to the network for a proper fee and run any application. Google has taken a very strong position for open access, open applications and open networks. Our investment in Clearwire is a good business and it also supports the principles of openness. We really want open competition among those players. In Europe, the regulators have been much clearer, for instance when it comes to phone number mobility and such. 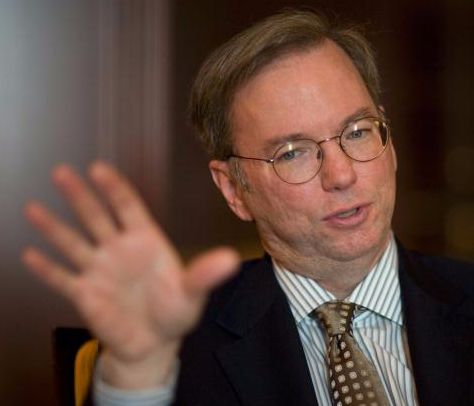 FAZ: What about web 2.0 in the advertising market ?

Eric Schmidt: The web 2.0 architecture is not necessarily a revenue opportunity. This is not where the money is.

FAZ: Sergey Brin mentioned in an interview earlier this year that the Google revenue with MySpace was not as high as expected. Are you disappointed about advertising in Web 2.0 networks? Is Web 2.0 advertising overestimated?

Eric Schmidt: It is obvious that people spend a lot of time in social networks. I believe there will be some new advertising products, that will work, but I don’t think they are invented yet. We and others are working on social advertising products.

FAZ: Which sort of social advertising do you mean?

Eric Schmidt: The advertising has to be more entertaining, more interesting, more immersive compared to what we have today. That is my opinion. We are not there yet but I am optimistic that it could work very well. What it needs to get there – trial and error. That´s the way we do it at Google.

FAZ: Who will win the social network competition? Will we see only some big players in the market?

Eric Schmidt: No, we will see some big and many specialty networks which are no different from the communities of interests that exist in society. The tail of interests is very, very long. So I don’t think there is a collapse down to one or two networks. 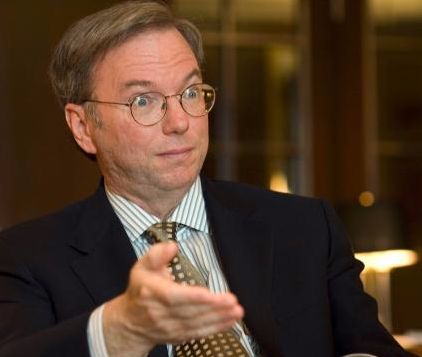 FAZ: How important are widgets or gadgets in the advertising market?

Eric Schmidt: I like this approach. We just announced a new version of iGoogle and there is much more to come. We will make gadgets more powerful, deeper, we will offer better development tools – and they can carry ads. Let’s go back to Web 2.0: It seems to me that people want a portable desktop. On iGoogle, you can have all your applications and archives – and they can move with you.

FAZ: How important are maps for the mobile phone industry? Anssi Vanjoki from Nokia mentioned the key entry for a mobile phone is a map.

Eric Schmidt: He might be right. All the new phones have GPS now. If you get lost just pick up your phone. Maps matter a lot in this context and have turned out to be much more fundamental.

FAZ: Another big buzzword is cloud computing. Is that the next generation internet computing?

Eric Schmidt: Cloud Computing is very easy: If you loose your computer with your hard drive, it is a disaster for some people. If you are using cloud computing, it is not. Or look at corporations: Many have huge specialised data centres and servers. Why do they need all that? Put it in the cloud! It is much cheaper! That is the new model. That transition is going to happen independent of Google. It is the time: The networks are fast enough, the computers are fast enough.

FAZ: Amazon is one of the drivers. Ray Ozzie said that Microsoft will have a cloud too.

FAZ: You don´t think so?

Eric Schmidt: I let you judge whether Microsoft will take his core applications and put them in the cloud.

Eric Schmidt: I can’t speak for Microsoft. They have a large revenue stream for products that run in the old model. The question is: Which ones are they moving to the cloud.

FAZ: At the end, we’ll see only a few huge clouds from Amazon, Google, IBM, Microsoft and perhaps Oracle?

Eric Schmidt: And maybe Yahoo. I expect a small number of very large players but a lot of very small players who are specialists. One of the questions is: Do the smaller players use the resources of the larger players?

FAZ: Is cloud computing a business model for Google?

Eric Schmidt: Today we can’t do that because our servers are all busy. But in principle: Yes, cloud computing is a business model for Google. 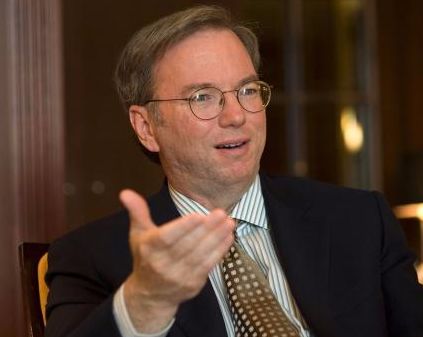 Eric Schmidt: Sometimes the Google search does not show the right answer. So the search has to understand the context of a query. I would like it to answer more hypothetical questions. The most extreme is: What should I do tomorrow? Or: “I am in Berlin, which spots shall I go visit?”. And for artificial intelligent techniques it is possible over time to approximate that kind of understanding. Even with the explosion of data. I think that is the most interesting question. I am extremely interested in this motion to put all the information online in the cloud. For example we could build a global calendar: What is happening on Tuesday – in the world? That is something you couldn’t do before. Oder coming back to android: The kind of application that are now being build are not the ones I have seen before. They use GPS and mapping data to construct things that are positive surprises to me.

FAZ: Let’s switch to Microsoft and Yahoo. Is it realistic that the FCC allows your search deal with yahoo? Your combined market share in search will be about 80 percent in the US?

Eric Schmidt: It is true that we have been talking with Yahoo, but we don’t have a deal to announce. Anything we did with Yahoo we will make sure that it will be in line with the regulator – in the US as well as in Europe. But it has to do as you define the market. We may be the leader in text ads but we are not in the online ad market in general or in particular online ad markets, for instance display ads. Yahoo is the leader in display ads and one of my concerns about Microsoft buying Yahoo is that you have two strong companies in the display ad business.

FAZ: Googles entry in the display advertising market is the acquisition of Doubleclick. Many online companies are worried about that deal because Google dominates search and – together with Doubleclick – they will dominate the long tail display market.

Eric Schmidt: This is one of these fear arguments, and it is not based on facts. We have always said that we do respect the way DoubleClick does business and that we are very careful in regards to existing DoubleClick contracts. The market is still wide open; there is no single leader. And there is a lot of innovation. Microsoft bought another competitor Aquantive. So I do not agree with the criticism.

FAZ: Data protection is very important, especially in Europe. EU commissioner Viviane Reding mentioned some weeks ago that the internet industry should foster a code of conduct, a self-regulation to protect user data. Do you agree with her?

Eric Schmidt: We have the most advanced data protection and privacy policies in place. As I have not seen this new self-regulation approach in detail, I cannot comment on that.

FAZ: So you don´t see any need for more data protection?

Eric Schmidt: There is always room for improvement. At this stage from our perspective we think what we do is correct. But the industry is suffering from the fact that the people don´t necessarily do what they are saying they are doing.

FAZ: Google launched a combination of Google News with Google Earth to show local news on a map. Some of Germanys publisher are worried about that because they are doing just the same.

Eric Schmidt: We are always trying to look from the perspectives of the end-users and if they are served well, we are not looking at it from the publisher perspective. We are solving an end-user problem better than others and some are worried because we affect their business. But at the end of the day the end-user should get what they want. It is very hard to argue against end-user value.

FAZ: Is it right that you will work together with Larry and Sergey for 20 years?

Eric Schmidt: 4 years ago we agreed to work together at least 20 years. So I have at least 16 years to go.