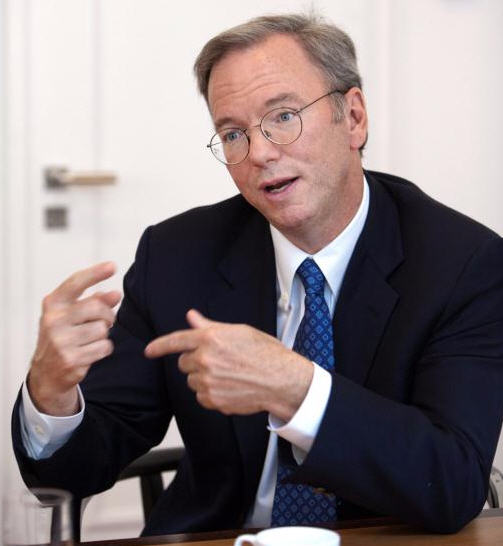 Eric Schmidt, CEO of Google, on net neutrality (“We don’t pay for traffic”), a new opportunity for the monetization of social networks (“Location based services will be a big business for Facebook, Google or others”), Openness versus closed systems (“We make a big bet on open und we have a better chance to win”) and the strategic battle with Apple and Facebook. The long version of the interview “Openness is my religion” (in German language) can be found here.

FAZ: Two years ago I asked you about the monetization of social networks. Your answer was: „The web 2.0 architecture is not necessarily a revenue opportunity. This is not where the money is. When you are in social network, it is not likely that you’ll buy a washing machine”. Would you repeat that answer today?

Schmidt: That is correct today. But there is a new opportunity for monetization of social networks which I would call the yellow pages. You can see this in what Facebook is doing and you can see this in Google Places. There are physical things in social networks, stores for example. You can advertise against those objects and it looks like classifieds or like yellow pages. My guess is that there is a lot of revenue going to be. Location based services will be a big business for Facebook, Google or others.

FAZ: What has changed in the past to years?
Schmidt: The explosion of the mobile devices. The people know a lot about a place. You see companies like Foursquare in New York which are really exploding. Foursquare works and they have to administer how to do it.

FAZ: So why did you launch Google Buzz when the money is in the local business?
Schmidt: We did Google Buzz because it’s interesting. Google Buzz is pretty successful. We are happy with that.

FAZ: Google Me is just a rumour?
Schmidt: There are so many rumours and speculations about Google. We do not comment them.

FAZ: Do you like native apps, build for one platform?
Schmidt: We at Google prefer browser based apps. If you have the iPad native app the alternative will be a browser based app. The iPad Apps have done a very good job to show what you can do on a closed platform. The problem is they only run on the iPad. The browser app can run on the whole web. 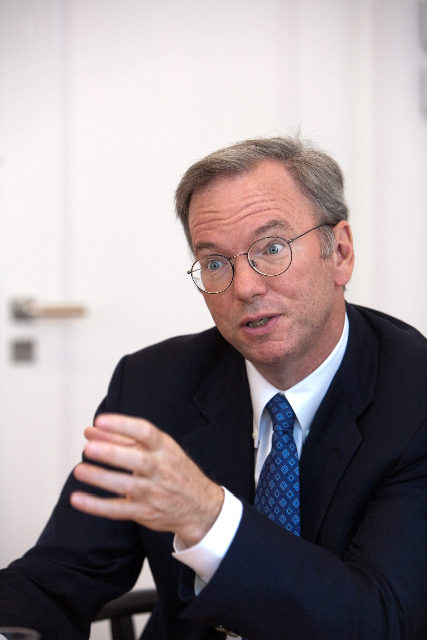 the moment we see a fragmented mobile world with many operating systems, apps and app stores. Do you expect a sharp consolidation of this fragmented internet world?
Schmidt: It is clear that Android will be on of the successful systems. Let’s assume that the iPhone will be successful. I think a lot depends on what Nokia and RIM do. Each company has new products in the space. Nokia is a larger mobile phone provider than Apple or Android, but their products have not a state-of-the-art browser. The Blackberry browser is not as good, too.

FAZ: Google can’t search inside these Apple apps. Is the success of the Apple app ecosystem dangerous for your business model because you are outside?
Schmidt: The market is going to be very large. There will be more than one winner. The iPad has shown a good set of closed apps. They are limited because they don’t work elsewhere. So it’s our opportunity to show that you can make the same level of quality apps but on browsers that give you many more platforms. Our approach is the open approach. We make a big bet on open und we have a better chance to win. Openness is my religion. The Apple religion is the opposite. I know that because I was on the board.

FAZ: The advantage of Apple is the easy to use payment system. Can you compete with that closed system in the open web?
Schmidt: We can build exactly the same principles in the browser. We have an app, we can charge for it in a store. Apple did a good job of making the whole ecosystem work. But they made a fundamental limitation because it only runs on Apple products. So we will try to solve it the other way. We will have solutions in that area.

FAZ: Tim O’Reilly wrote an interesting blog post about the war of the big platforms Google, Facebook, Apple and Amazon. Do you agree with him?
Schmidt: I don’t want to use the word war. But it is a strategic battle. We are clearly betting that the open platform will get the same functionality but it is much larger. HTML5 will address that. That is our bet.

FAZ: In that interview in 2008, you said the next big wave in advertising is the mobile internet. But where is the money? Search, display, paid apps?
Schmidt: Today it is search. It will be display because display should be very well suited to the mobile phone. It is highly targetable. The experience about pay is done. Most people would prefer a free model with advertising.

FAZ: Your proposal with Verizon on net neutrality was very controversial. Could you please tell me your approach for the mobile internet?
Schmidt: First, the majority of the internet is wired, not wireless.

FAZ: But that will change.
Schmidt: But today it is mostly wired. Our proposal is that full net neutrality be applied to the wired internet. And that the wireless decision will be made be congress some time from now. We made that proposal because we wanted to move the discussion forward. Google is not changing what we are doing. But what happened was that people were lying or misrepresenting what we said. They did it ahead of the details of our proposal. So everybody who heard it heard that we are buying traffic which is false.

FAZ: But many mobile network operators are about to build fast lanes in their networks, especially for the LTE networks.
Schmidt: The wireless market is very competitive and the market will solve that.

FAZ: Are you surprised on the reactions to your proposal?
Schmidt: The reactions were stronger than we expected because of the way people misrepresent what we are doing. All the chatter is so ill informed. Again: We do not change our business policies, we do not have a deal with Verizon, and we are not buying traffic. So clear answer to all three questions: no, no, no. I hope that is clear.

FAZ: But operators like Deutsche Telekom want to get money from Google.
Schmidt: But we will not give them money. That’s a bad strategy. We don’t pay for traffic.

FAZ: And you won’t do that in the future?
Schmidt: No.

FAZ: Imagine a 100 Megabit wireless broadband world and a smartphone in your pocket. Which services are possible in the next five years?
Schmidt: What can you do with 100 megabit? The most obvious thing is that all the existing entertainment choices can fit in that 100 megabit scenario. You can have on your mobile device all of your television, your movies. The next thing is a videoconference. Your android phone would on default turn on your camera unless you told it not to. Every phone call becomes a video call. Let’s get it more interesting. When I walk along the street, there is perhaps the opera, a movie theatre, a commercial vendor and a school. Each of them could produce a live stream for people walking by. If you go along the phone could detect that and say: We are in front of the opera. Let’s hear a little bit from the opera. Or not if your query was “I do not like opera”. It’s reasonable to expect in 5 or 10 years that the device will know where you are, it will know what is happening around you and it will make recommendations as what is most important for you. The system will know whether it is the opera or whether it is the movie theatre you want to hear from. The next things you add to this vision are your friends. The system knows where your friends are. If one of my friends is in Berlin, the system would tell me.

FAZ: Do you need a social network to provide this sort of information?
Schmidt: You need the social graph, not a network. You can get this information from Facebook, from Twitter or you can build it yourself.