Over the past few days, we’ve been seeing how the controversial Network Enforcement Act NetzDG is turning a whirring, entertaining and sometimes silly means of mass communication into a fink forum for self-righteous grumpy Guses. This is about Twitter, a little about Facebook, and mostly about the nuclear level blunder by the SPD, namely the grossly overestimated understanding of what it by right can do. It’s possible that this insight is now seeping through to the Minister of Justice Heiko Maas. He too was once called out on hate speech, and now Twitter has deleted one of his tweets.

The Social Democrats are currently shocking us with their astonishingly anti-freedom statements – some even advocating for unadulterated censorship. Eva Högl (SPD) said something along the lines of content needing to first disappear and then reappear online following a legal review.

That is pretty close to the legal definition of “censorship”: namely a state pre-check.

Sawsan Chebli (SPD) has made the disconcerting intimation that right-wing conservatives like those from the AfD or Thilo Sarrazin (admittedly also SPD) should no longer be allowed to express their opinions.

And the EU’s “Digital Charter”, hostile to basic rights and promoted by SPD chairman Martin Schulz, has already been an extensive topic of discussion elsewhere.

The party is in urgent need of help when it comes to the importance of freedom of expression – and also having a sense of humor. A lot of SPD politicians apparently don’t get satire. So it matters to them not one bit when this gets deleted along with hate speech. It is hardly coincidence that the “Titanic” was never sued by Helmut “The Pear” Kohl (CDU), or Roland “where does human life begin” Koch (CDU), or Volker “how sexy is politics allowed to be” Bouffier (CDU), but it was sued by Kurt “kill the beast” Beck (SPD), or Johannes Rau (SPD) and Björn Engholm (SPD). Even Gerhard Schröder (SPD) proved himself thin-skinned when the debate over his hair color reached all the way to Karlsruhe.

But it wasn’t just the SPD’s unbridled censorship and a customary and appalling knowledge gap concerning the digital world that steered the federal government head-on into chaos. This was coupled with a downright childlike, uncritical trust in the magical power of jurisprudence.

Anyone in favor of the NetzDG wants the impossible, is overstepping the law, is rubbing a plastic bottle while hoping for a genie.

Federal Minister of Justice and licensed lawyer Heiko Maas soberly narrated a ridiculous fairytale to Germans. Namely one in which a couple of paragraphs were capable of solving the most urgent social problems of our age: hate, resentment, and social decline. He overestimated his tool.

Furthermore, and this is also an important and under-emphasized aspect, he was angry because he, Maas, and other politicians, especially at the local level, were being harassed on social media.

But wait just a minute, scream the NetzDG apologists: How can the law be an overstatement of the law when it supposedly doesn’t create any new obligations? Andrea Nahles, SPD faction leader in the Bundestag, argued along these lines. Over the weekend, she once again struggled with the worn-out online phrase about there being no legal vacuum.

However, the NetzDG does indeed create new obligations.

First of all, for practical reasons (for lawyers: “factual”): A trivial insult like “idiot” (Maas about Thilo Sarrazin) would never send someone crying to the nearest police station in the real world. Consequently, nothing gets deleted or removed. Perhaps the allegedly scorned person might run home foaming at the mouth. But once the computer’s been switched on and Word’s loaded up and ready for the forthcoming rant of a criminal complaint to the public prosecutor’s office – the anger has usually subsided. A natural pre-filter ensures that coarse shade does not morph into judicial skirmishes.

Enter NetzDG: A couple of clicks suffice. You don’t even need a criminal complaint. And off the report goes. Even if it’s about an insulting tweet by the future Federal Minister of Justice. This is how things are looking. 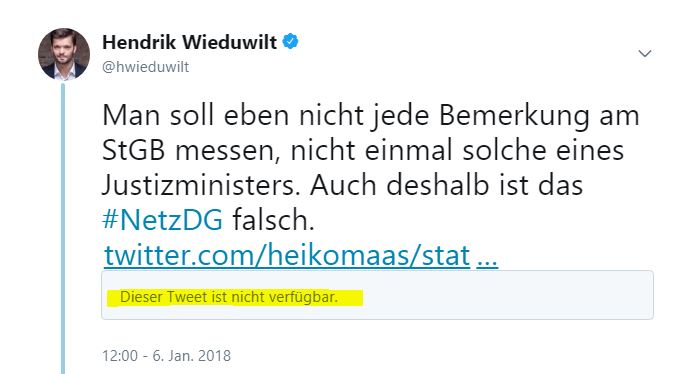 However, because of these deletions, it is now part of the usual Twitter melee to photograph compromising text for posterity and then take pleasure in showcasing it as soon as the network’s cleaning agents have set to task.

However, even from the legal perspective, there are more rights online and not fewer than in the real world. At the public prosecutor’s office you would merely spare a bored chuckle for such an “ad”. As a rule, the person so dubbed would have to file a criminal complaint of his own volition. If instead a third party were to file a complaint spurred on by indignation over moral decline or to punish someone, nothing would happen. “Idiot” just gets left hanging in the room.

Is it possible that reality is a lawless realm?

It’s true: A lot of the NetzDG obligations were already being met by the companies beforehand. The obligation to delete originates from interference liability in connection with the penal code (it is by no means contained in the German Telemedia Act, as a spokesperson of the Federal Ministry of Justice claimed at the government press conference on Monday). However, up until now the providers were given more leeway on the timeline.

The NetzDG is actually a HecticG.

It demands the impossible from most companies in a short amount of time. And the issue of what is permissible and impermissible is pretty complicated and mired in gray zones to boot. Had Maas just sat down for a quick coffee with a sleep deprived media lawyer to discuss the NetzDG, the lawyer would have been able to quickly outline the issues and advise him to bury the project.

Exactly how complicated is it? This complicated (examples from the judicial review  by Andreas Stegbauer in the NStZ (New Magazine for Criminal Law) professional journal 2015, 201):

“Siggi Heil” is punishable even if a “Siggi” is being greeted, but only given a “specific intonation” – according to the Berlin-Brandenburg OVG (High Administrative Court). The judgment is not explicit but rather relies on witness who understood “Sieg Heil”.

Today we would say: it was reported so it has to go.

The artist Meese is allowed to depict the Hitler greeting: It is satire according to the AG (district court) in Kassel. Whether the facts of the case are relevant, but are accepted because of freedom of art or whether the whole thing is not a Hitler salute, nobody knows – it is controversial.

The NPD poster “Good journey home“, a caricature of Asian-looking individuals on a carpet, was permitted by the VG (People’s Court) in Berlin and the OLG Higher Regional Court in Munich. A political position was announced, but foreigners were not denied the right to live in Germany.

Regarding the poster “Hit the gas”, the VG Berlin acknowledged that a reference to a gas chamber might very well be indicated. But also that there also exists such a “popular” expression for accelerated politics. And that means freedom of expression when in doubt.

A quick test break: Would you have made the same decision?

Promoting the exclusion of foreigners in Germany from social healthcare and pension schemes and their expulsion within the framework of a five-point plan was enough for the Berlin Regional Court to assume that it would incite the masses. However, the Kammergericht (highest state court) overturned the ruling. This was not in itself an invitation to arbitrary measures and, moreover, such measures were not necessarily suited to disrupting “public peace”.

Would you have come up with the argument of “public peace” of your own accord?

“Germans defend yourselves – against foreign infiltration, Islamization, and foreign crime!” is hardly an endearing slogan, but still lawful. The Federal Court of Justice believes that despite the use of words like “multi-criminal” and “social can only be national”, this could be seen as exaggerated examples of the consequences of a misguided policy. So the state exercised restraint allowing the poster. It can be assumed that the Senate still felt disgusted.

Another well-known bonus case from recent legal history: The chairman of the AfD faction Alice Weidel may be called a “Nazi whore” – but only in exactly the same context of the “extra-3” moderation (a satirical programme), judged the otherwise rather strict LG (regional court) Hamburg.

Whereas courts once brooded for a long time, sometimes erred, and later retracted, the informant now presses a button, and a tired monitor from Twitter or Facebook is given a few seconds to approve the message (and thereby reduce the deletion rate later published by the employer) or to quickly finish off the job. This is how privatized justice emerges. This is how “overblocking” evolves. In the meantime, messages have even been deleted in which only a deletion was reported.

While Twitter tells journalists it has nothing to do with the NetzDG, even a spokesperson from another tech company has to laugh.

So get rid of the NetzDG?

No one should have any political illusions: the NetzDG is here to stay. The FDP and now the Greens want to get rid of the NetzDG, along with the AfD. However, at the heart of the whole fatigue, the future Groko (Grand Coalition) is not interested in the whole You’re In Charge at the moment. Did anyone think that Lars Klingbeil – the net savvy, intelligent – Secretary General of the SPD, would change that?  The Internet-savvy factions around the large people’s parties (Cnetz, D64) are keeping quiet. The Internet is invoked in every speech, but it has yet to reach the political mainstream in 2018. On the contrary, The Chaos Computer Club is now looking away in frustration because, although its advice is occasionally sought, it is usually ignored.

And the louder the AfD bellows about the NetzDG, the less likely the coalition is to back down and concede to those grubby urchins in Parliament. The NetzDG is reality. It has erected a treacherous system of secondary censorship.

Heiko Maas as Minister of Justice and policy driver has indeed left behind tracks.